oberste Seite > Statement by H.E. Ambassador MIZUTANI Akira at the 1366th（Special）Meeting of the Permanent Council of the OSCE (5 April 2022)

Statement by H.E. Ambassador MIZUTANI Akira at the 1366th（Special）Meeting of the Permanent Council of the OSCE (5 April 2022) 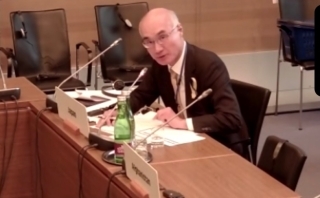 Russia’s military actions in Ukraine clearly infringe upon the Ukraine’s sovereignty and territorial integrity, constitute a serious violation of international law prohibiting use of force, and are a grave breach of the United Nations Charter.

Any unilateral change of the status quo by force is totally unacceptable. This is an extremely serious situation that shakes the foundation of international order not only in Europe but also in Asia.

Recently, the Ukrainian government and various media reports have revealed that atrocities, including the mass killing of innocent civilians, were committed in the areas near Kyiv, which were occupied by the Russian military forces. Japan takes extremely seriously the fact that a large number of civilians in Ukraine have been killed as a result of the acts of the Russian forces and is deeply shocked by this revelation. The killing of innocent civilians is a grave breach of international humanitarian law and is absolutely unacceptable. Japan vehemently condemns it.

The truth about these atrocities must be uncovered and Russia must be held strictly accountable. Japan has referred the situation in Ukraine to the International Criminal Court (ICC) on the grounds that war crimes appear to have been committed, and counts on progress in the thorough investigation by the Court's Prosecutor.