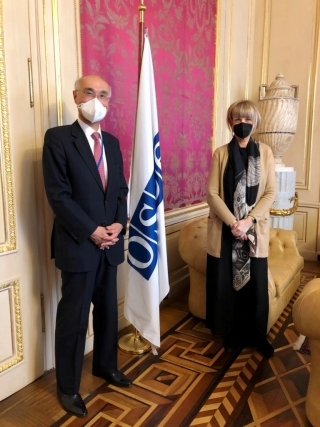 Photo credit: OSCE Secretariat
On 12 March, Ambassador Mizutani paid a courtesy call on the OSCE Secretary-General Helga Schmidt, who had been appointed to her current position last December. The OSCE is the largest regional security organization in the world, with 57 member countries in North America, Europe and Central Asia. Japan provides human and financial resources to the OSCE as an Asian partner for co-operation. During the courtesy call, Ambassador Mizutani and Secretary-General Schmidt exchanged views on the past good relations between the OSCE and Japan while looking forward to celebrating the 30th anniversary of these relations in 2022.